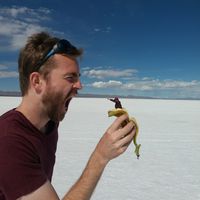 Doing better than the day before...

Currently having a great time in Brussels, I work here now.

I'm a generous and nice person. People who know me use to say that I'm a funny guy, with a funny french accent (I'm losing it I guess)... I think it's true, because I hear that often! But I'm also a serious person and sooooo interesting!

I try to reach my goals, I never regret or look back (only in the mirror)

Woow!! Three times officially, but I hosted already some friends late at night here in Brussels, they told me that the couch is confortable hehe!!

sport, cinema, travels.... I was also involved in international summer voluntary workcamps abroad, especially in Europe. I had the opportunity to meet many unique people from different countries, cultures, politic and religion opinions, which is something so important in a lifetime

I like independant movies, especially american (little miss sunshine was such a great movie few years ago!).

Once, I decided to swim in a splendid and paradisiac lake in Sweden in the summertime, nice weather, almost with the midnight sun, no mosquitos.... I shouldn't! Too cold! I got chicken skin and purple lips... I thought I couldn't stay 10mn in this frozen water, but I was not alone so no problem... It's a wonderful story to tell anyone, even if it doesn't sound funny! Actually I keep in mind the nice way of the story...

I'd like to learn Yoga, rock, salsa, guitar, and so many things. I don't have special skills to teach, but I could teach what I know.

We'll see!
But don't forget to mention "Manneken Pis" in any request, we don't like basic copy/paste process, and only regular requests have a chance, as we receive so many messages every day ;)
We prefer not hosting couples....