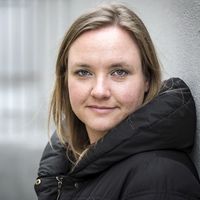 ABOUT ME
I'm 34 years old, and live in Randers with my husband Andreas, and our two children.
I love meeting new people, new cultures, and to widen my perspective. Unfortunately I haven't had much time to travel since I became a mother, but I'm starting to make small trips again with my dear friends 😍😘

I am a curious, talkative, funny and caring individual, who loves to sing, and I used to sing in a band too, and I have also played the theater since my early childhood.
At the moment I'm a full-time student where I take a
bachelor’s degree in social education, and I am also politically active for my education ❤
I love watching movies, going to concerts, and I love to go out dancing in a bar with my friends, and drinking some wine, when we find the time in our busy schedule.

I like people with humor, and that are open minded, welcoming and polite, and I hope this is also how others would describe me as a person :-)

I always try to live by the philosophy that I have to push the limits for my own comfort zone in eager to grow as a human being. There will always be times and situations in our lives that are more tough than others and where you doubt yourself, but where you can learn something new about yourself or the world we live in, by taking a small step forward. It doesn´t necessarily mean, that you have to throw yourself in front of hungry tigers, but for me the both small and big steps is where I grow. As an example: When I was 16 years old, I also loved to sing. But every time I stood in front of an audience, my voice would fail me and my knees would shake. At that time I was going to a school in Aarhus named "Gøglerskolen", where you studied and learned about performing arts. Every 6 months there would be this Circus Varieté, where you focused on a project you were going to perform for an audience. And on my last circus varieté, I decided to push my comfort zone and perform a song acapella for a live audience of 300 people. It was scary as hell, but I did it, and since then I have never been shy when performing both singing and more theatrical shows.

I love being out in the great outdoors, and I spend a lot of my time walking and going by bike in Randers, where I live close to a big river called Gudenåen and the nature around it is just wonderful. I don´t own a car, both for environmental and economic reasons, so my means of transport is either my bike or public transport. This also means that my two children have learned from an early age how to be self-reliant when transporting themselves, and my baby girl learned how to ride a bike when she had just turned 3, and they both have never used support wheels. This makes me proud, because mostly children in Denmark is being driven to their daycares, and don´t know how to use a bike before much later!

I've been active on CS since 2009 and have made a lot of great experiences, and met wonderful people. I met a girl quite shortly after I joined CS, who is from Brazil, and 6 months later I was invited to her wedding. I met another girl from Hamburg, who is not only my friend now, but my very close friend. We have visited each other a lot of times, and even celebrated new years eve together! I met a girl from The Netherlands with her danish husband, who now lives in Rotterdam, but they still visit me when they visit their danish family here. And I met my british Uncle Ian when I attented a CS barbecue in Aarhus, and visited him twice in his home near London. This is what I love about couchsurfing. You get these amazing connections with people you didnt know you needed to know, and for that I am richer every time :-)

I have also arranged a dinner myself on a restaurant with other cs'ers and participate in as many other activities as possible.

Since I became a member, I've met so many amazing people. I'm really gratefull for all the nice people I've met and now are in my life and thoughts.
I have couchsurfed in London, Hamburg, London, Flensborg and it was such amazing experiences!
Besides that I have met up with a lot of people from Aarhus, both couchsurfing meetings and in other social gatherings. I love couchsurfing cause there's so many lovely people to meet.

I love to travel, but haven´t had the time or the money as a student these past years, since I became a mother. But I hope I will be albe to travel more, when I am done studying :-)

I LOVE to meet new and exiting people, and exhange cultures. I think this is one of the many ways which make you grow as a person.

There's so much music I love, and different kinds. Sometimes i love to listen to Mads Langer, Quadron, sometimes its Metallica or Rammstein. Other times its Christina Aguilera!

Diving for the first time in Alanya, and seeing the world under water.
When I was in Alanya, Turkey I jumped into a roaring river, while river rafting. It was from a tree from 4meters height!

If you live in Denmark, and dont know the language that well, I would like to teach you some. I'm not a teacher, but I am willing to offer my help.
If you are coming to Randers, I would be happy to show you around in my beautiful town.. :)

My vocal abilities as a singer, my great sense of humour, warmth and openmindedness.