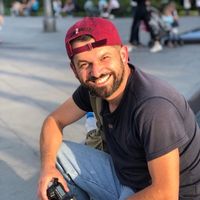 “Twenty years from now you will be more disappointed by the things you didn’t do than by the ones you did do. So throw off the bowlines! Sail away from safe harbor. Catch the trade winds in your sails. Explore. Dream. Discover!”

I was born in Brasil, followed by 1 year in Angola and I was raised in Chile. Then some time in Canada, Italy, Egypt with back and forward to Chile, and a longer period in South Africa. I just moved to Estonia and looking forward to settle.
I have lived in more than 20 different houses during my life.
I think I'm an easy going person. But I usually over-think, which may cause some troubles. I'm a believer that the most valuable things are our experiences, the things that we do while we live.
I love music, I live with it, all day. Unfortunately I'm really bad playing it, I'm actually unable to play any instrument!

I like to wake up early because I always want to do many things! I have too many ideas and plans!

I think life has been more than generous to me, so it's pretty important to give back at the very least, whether it be by volunteering, making jokes, just taking pretty pictures and sending it to them when they don't expect it. Sometimes it brightens up their day and in turn might want to make others happy as well.

Im pretty old over here, I've been couchsurfing and hosting people for about 12 years.
For the newcomers... it really works if you know how to use it. But try to be respectful with the others.
I try to host people as much as possible. I enjoy talking with foreigners, I actually enjoy talking to any interesting person.
I have been able to "surf" and share knowledge of CS, travel and live with many amazing people.
Most of my requests are planned, but I tend to accept last minute request if they come from a person with a complete profile.
Everytime I host people I like to share a drink with my surfers or/and prepare a dish together, but that's not mandatory, it will depend on each person.

-Pretty much every sports.... Football (soccer), thats something unique in my life!!
I enjoy watching tennis and formula 1. I started to practice boxing a few years ago but haven’t been able to do it since Im in South Africa.
-Karting!! Such a great thing to do in a weekend.
-Wall climbing. Im not good at all, but I do enjoy it a lot.
-Hiking!
-Photography: I consider myself an amateur photographer. I really like it, but unfortunately, I don't always take the time to go out with my camera and start shooting.
-Life: Laughing at yourself.
-One-way tickets: I want to do that at some point of my life.
-Discovering coffee, wine, beer and chocolate.
-Cooking: It's very relaxing for me. Unfortunately I don't do it as often I would like to, but I try!
-Nutella!!! Sahne Nuss (chilean chocolate bar), Bis (brazilian small chocolate cookie) and brigadeiro (brazillian home made chocolate) I really like them!!
-Injuring myself around the world, walking holes in my shoes.
-Never love anyone who treats you like you are ordinary (O.Wilde), so keep that in mind and everything will be alright :), it worked for me so far.
-Teaching and learning.
-Thinking out of the box, reading between the lines, doodling in the margins and using the parts of my brain I didn't know existed.
-Adventures and misadventures, secret places, fate and coincidence, spontaneity.
-Star-filled skies, fresh air, thunderstorms, mountains, oceans and all things green.
-NOT working in cubicles!!!!!! I recommend the film "Office Space". Although I have never worked in a place like that, according to some of my friends comments, I think what you can see in that movie is what happens in an office.

*Have treated a Rhino’s wounds
*Worked in a place were it's -35C outside!!
*Watched Canadian Rodeo!
*Watched an NBA game in Toronto and Cleveland!
*Watched a Barcelona's football game at Nou Camp!
*Been at the Niagara Falls!
*Been in the Quebec winter's festival!
*Been in the Brazilian street carnival in Florianópolis and Ilha Grande!
*Slept in a paradisiac beach with almost no people around (Dois Rios, Ilha Grande, RJ, Brasil). I think is the most beautiful place I've been at!!
*Been at the Canadian Rocky Mountains!
*Traveled Transylvania
*Hiked mount Tianmen and Huangshan.
*Ride a scooter through Yangshuo.
*Watched the Sartiglia

I try to contribute everyday. I try my hardest to listen. It's important to keep an open mind. I share any knowledge that might be useful to the task at hand, and give any references that might be helpful!
We are constantly teachers and students. It's important to approach each situation with no expectations, just a receptive, willing, and giving mentality!
I can practice English, Spanish or Portuguese. I enjoy to talk about movies I've seen.
Im not a pro, but I can cook and teach that. I usually improvise when I cook, but many time I run out of ideas.
I would like to get better at photographing, Im just an amateur.