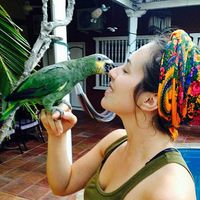 I studied french literature and spanish translation / I love gardens and bees / I love to dance, yoga and aerial circus

Travelling is all about the people we meet and experiences we live and I feel like this is what make the person in constant evolution that we are.
Couchsurfing is one of the most amazing organisation since it allows us to connect and share with people from different horizons that will make us grow. We break borders and connect altogether.

I travelled the US and Mexico for 5 months living in a small van with my boyfriend in 2011-2012, and couchsurfing was our way to really discover and connect with the city we were visiting. We couchsurfed in Toronto, Detroit, Chicago and California and the people we met there were all different just like their city, but all so interesting, passionate, and open mind.

Learning the technique of Vipassana.
Flying in a small plane over San Francisco Bay.
Swimming naked in the sea during a storm with my soulsisters In Cap-aux-Os, Gaspesie. A seal came to swim with us.
Roadtrippin the USA and living in a small van (we got for 400$!) for 6 months. From Detroit to Yellowstone to California to New Orleans to Miami... and back to Montreal!
La sagrada medicina del yage. Being in Sibundoy, Putumayo (Colombia) for the Carnaval del Perdón.
Scuba diving every day for three months and discovering the underwater world!

I can teach you some french, maybe some spanish (if you're not better than me....). We can cook together and exchange some recipes. I love vegeterian food (even though I eat meat and fish sometimes) and worked 4 years in the best vegeterian restaurant in Montreal.
If you play accordeon, or bass, I want to learn!
E eu quero aprender Português!!