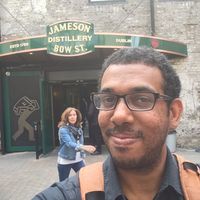 The travel options we have in this generation are unprecedented, and I want to see it all. Over the next decade I intend too, until I find a city I want to call home. I'm an outgoing guy who likes to get to know people with different cultural backgrounds. I'm all about my music, books, hiking, camping, the beach, tea, Hockey, good quotes, good morals, good beer, biking, Anthropology, kayaking and Philosophy. Oh, and backpacking!

I maintain a positive mindset and do my best to keep a smile on others faces as well! I'm easy to talk to &amp; get along well with everyone. Have a FACEBOOK? Add me.

-It is not for a man to put himself in such an attitude to society, but to maintain himself in whatever attitude he find himself through obedience to the laws of his being.

-Friendship is unnecessary, like philosophy, like art... It has no survival value; rather it is one of those things that give value to survival.

-Too often we underestimate the power of a smile, a kind word, a listening ear, an honest compliment, or the smallest act of caring, all of which have the potential to turn a life around.

-If one advances confidently in the direction of his dreams, and endeavors to live the life which he imagined, he will meet with a success unexpected in common hours. He will put some things behind, will pass an invisible boundary; new, universal and more liberal laws will begin to establish themselves around and within him, or the old laws be expanded, or interpreted in his favor in more liberal sense, and he will live with the license of a higher order of beings.
In proportion as he simplifies his life, the laws of the universe will seem less complex, and solitude will not be solitude, nor poverty poverty, or weakness weakness. If you have built castles in the air, your work not need be lost; that is where they should be. Now put the foundations under them.

I've hosted a dozen people off and on this site. While traveling I couchsurf about 1/2 of the time, I like to mix in camping, pen pals and fun hostels as well. Attend CS meetings here and there for fun.

I've off and on hosted throughout the years for friends of friends and family friends. Via CS i've hosted and have been hosted a handful of people so far.

most travel related books and essays.

Rooftop drinking games in London, Fireworks and Beer in Brussels, Climbed the Dom in Koln, Clubbing in Prague, Ruin Pubs in Budapest, Sunrises in Venice, Gelato in Firenze, Hiking on Lake Zurich, Rachlette in Paris and everywhere I've been made life long friends &amp; memories!

Learn from one another &amp; keep an open mind!