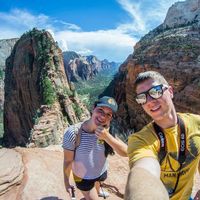 I am 22 year-old guy. I love all sports and do them. I am gymnasticsman but I also like ride by bike. I like listen to music, make tours and make movies.
Let me know if you are around Eger, and I can show you the city or the surroundings.
And maybe you can sleep here as well.

About my plan. I want to be a pilot and I will be. My goal is to be a first officer before I'm 25. Currently I'm a cadet so I think finally I'm on my way. I'll get the private pilot license in September and after that I "just" have to pass the ATPLs.

I have a 2 years old dog, he is Buddy, a border collie. And he's gonna be my traveller buddy (what a creative name by the way).

I'm also in Budapest sometimes so I can give you a ride between the capital and Eger (actually Eger is nicer, told by travellers and tourists)

I wanted to make a trip from Hungary to Netherland (through some countries of course) by bike. AND YEAH, I DID IT!!!!!!
Furthermore I want to travel around the world.

Gramatik, RHCP, Irie Maffia, Punnany Massif and many others, the raw is so long :)

03.2016: I saw the Aurora Borealis and were in Norway alone for a week (that was a good feeling).
And I slept in a tent in -5°C on a mountain in Norway... No that was not amazing, that was horrible but I survived.

2017 january: I planned a roundtrip to Iceland and we went there a group by 10... it was amazing.

2017 summer: I worked in the United States and travelled in 6 States. The life the travelling and what happenned was amazing. I will do it again.

How to do gymnastics
Helping by films
Show some photography skills
If you pay for plane rental, I can give you a ride (95€/hr)

I can show you some typicall hungarian food. Maybe we can go to restaurant or can make food at home.
And of course, some couch. One big couch upstairs one big and one medium in downstairs. So 5 people.