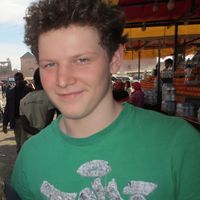 Hey Guys
I´m Eric from Munich. After I graduated i wanted to do a gap year, because i had enough of learning after 12 years and wanted to see the world. So i started to work as a pizza-delivery-guy to earn some bucks, which i used to explore canada and the US for 4 months. And now i am going to study engineering.
I think its always hard to describe hisself, but i would call me very unprejudiced. I try to understand everybodys mind and their sense for living. And if i am not fitting with someone, i am able to leave him with his cognition. Except he is a total dickhead....

At first i was doing couchsurfing because i didnt get a working visum for canada and i couldnt afford a expensive way to travel. So i decided to do couchsurfing and wwoofing. But i realized fast, that couchsurfing is just freaking awesome. I met so many nice and diffrent people but all of them were really open and gave me an idea of their living. So i got so many impressions and thats what travelling is about to me...

My major interest is soccer. I am a big fan of 1860 munich and i am going to every game since i am 11, altough they suck pretty much. I also play in a club myself, but we also totally suck, but who cares as long as i have fun...
Also as every german man i like to drink beer
But i am pretty much open for anything along my couchsurfing experiences
I attendet to penal discussions, went to university talks, had some polish dance lessons, got to art-galleries....

Music:
Mostly hiphop
But getting more into electronic and indie stuff aswell

Movies:
Blood Diamond, Into the wild, Shaun of the dead, Inside Job

Driving the danube with a canou for a month. Me and my buddy from Deggendorf (germany) to Baja (hungary)
900km of paddeling

You will look tanned next to me :)