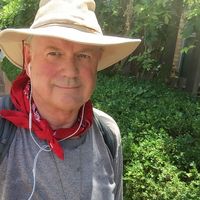 Tall, cordial, and fun. I'm out-going, or so I tell myself. Don't let the age fool you.

I first went on Couchsurfing because my son was graduating from college, and I need a place to stay for one night. I was offered three, and I accepted. Now, it's my turn to pay back.

Minor celebrity on YouTube. Look for WildBill1911A1 before you decide.

I listen to books via audible.com. Angle of Repose is my latest. Before that it was Plato's Republic.

I have chased Soviet (Russian) submarines around their patrol area in the Pacific. I've led an expedition to climb an 11,000 foot high mountain, I'm a former naval officer, and I lived in a commune in college. I was the scoutmaster for an inner-city scout troop: it was so long ago, that the 'kids' are now middle aged men and we met up not that long ago, to tell stories about the troop, and their lives since then.

I can teach you how to use a snapshot camera to make videos suitable for YouTube.