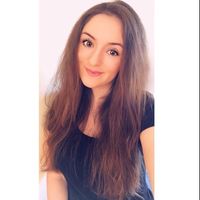 "Blessed are the curious for they shall have adventures." - Lovelle Drachman

I was born in Regensburg, Germany and grew up in a small town near Regensburg. When I was 18 years old, I moved into my first own apartment in Regensburg and lived there for almost 3 years while going to nursing school. At the age of 21 I decided to start something new and trust the magic of beginnings: I gave up my apartment, sold most of my furniture, quit smoking and headed to Australia - a country 15,000 kilometers away that I had never been to. I spent one year over there before I came back to Germany to live with my grandparents for a few months, then lived in Dublin, Ireland for half a year and then moved to London to work as a flight attendant for a year. After being stuck in Germany due to covid for 8 months I moved to Iceland and am now working as a nurse in Reykjavík. I've been a Vegetarian since 2006.

In case you wanna see more photos, here is my Instagram name: annika.hrtl I'm an openminded and spontaneous person and I like people who don't take themselves and life too seriously.

I wanna meet new and interesting people, get to know different cultures, make new friends from all over the world, have fun, travel a lot.
It's all about having this special and amazing feeling of LIVING instead of just existing

My dream is to visit every country in the world.

I'm interested in so many things. I just love to get to know other cultures and lifestyles.

Went on a total of 11 roadtrips around Australia

I could teach you some German

I'd like to learn a lot of things. Hard to list them here. Tell me what you can teach me, I'm always happy about having the chance to learn something new!