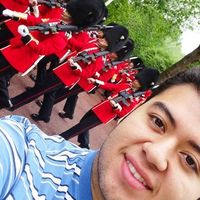 I am going to NYC for my 25th birthday never been to NY and I think it's the best place to be for a weekend.
Currently, I live in Central Pennsylvania and I work in the TV industry. I moved to PA from Orlando.
I lived in Chicago and went to school there but I was born in Guatemala.
Ever since college, I have become addicted to traveling, cities I have visited are: Miami, Orlando, Los Angeles, San Diego, Puerto Rico, and Las Vegas. I have done service projects in Milwaukee WI, Omaha NE, Lampe MO, and Cookeville TN.
Outside the states I have been to Rome, Florence, and London.

I want to keep traveling and meeting people from other countries. I'm hoping to go to Spain, Colombia, Ecuador, and Mexico in the near future... but I essentially would go anywhere new.

Food, food, food. Nothing is better than a good meal and a great conversation.
LOVE TO EXPLORE

I listen to Spanish pop music mostly but I listen to anything others around me are listening to.
Not really into movies but I do watch some series on Netflix (Velvet, Las Chicas del Cable)
Love the Food Network Channel, my favorite show Survivor on CBS. Love to laugh with Eugenio Derbez and all his comedy shows. Shakira is my idol.

The different service/mission trips I took part in as a student in college.
Traveling to Europe has been the most amazing thing I've done.
Been on live TV show when I visited BBC in London
Had the best pizza in some alley right outside of Rome
Been to some of the hottest clubs in Las Vegas
Eating Argentinian food at the pier in Miami
View sunsets in KeyWest and SW Florida

I just love to teach anything I can. I like sharing cultural differences that make the latin culture unique.