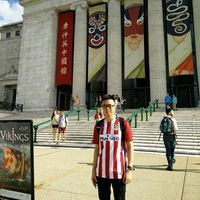 I'm a Malaysian master's student in Milan. I previously lived in the U.S, pursuing my degrees in Anthropology and Journalism. I like spending time around people but a crowd is too much, I think that's the best way to know someone. Kind of a nerd, not a big fan of the clubbing and partying scene, would rather spend some time strolling in the city at night. Or a good book.

I'm sorry I can't share my couch at the moment, I live in a small flat with no extra room

To meet locals and really learn about local culture first hand. I try to look for human stories and seek opportunities to study about this vast world in which we appear only as a speck of dust.

I love football (soccer), I love watching it, playing it. A softcore gamer on the PS4.

I am actively blogging about my travel experiences. I really want to attract more readership. Hopefully it grows into something more of a personal portfolio than just a side hobby.

I spent a month in Sarajevo covering a feature story about the Roma population there. Managed to meet some amazing people who broke the glass ceiling. After that I backpacked in the Balkans and Eastern Europe for 6 months by myself.

I hope to learn so much more about the world from people who lived different experiences as I did. What I can offer in return are my experiences of living in a multiracial country (Malaysia) and how we embrace each other's cultures and speak each others' languages. People also generally seem to be interested in my fields of study (anthropology and journalism), those are two areas I can talk to you about for ages. You're not a journalist if you're not a good storyteller, I have a bunch of them!

My experiences growing up in Malaysia, tropical, multiracial and unique. I can also share about my experiences of studying in the U.S, particularly in the less urban settings of Iowa. My favorite topic to talk about is travelling and mutual experiences, nothing better than to learn from others with a similar dedication to exploring our ever-changing world.