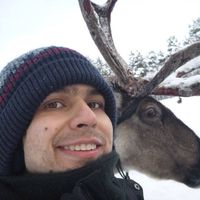 I am a calm guy, that loves traveling and meeting new people. I love nice views and interesting conversations.

I'm a student of Mathematics and Computer Science, in an exchange in Helsinki during one semester. I want to travel around Europe as much as I can, because I don't know when I will be coming back.

I can teach you about my country, its culture, its dances, its food... I can also help you with your maths homework or I can teach you to solve the Rubik's cube ;)

As stated above, I can teach you a lot about my country, its culture and so on.