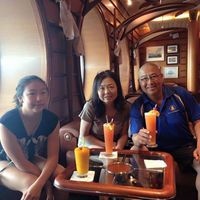 I was a high school teacher of social studies(history, government, economics) here in Silicon Valley for 32 years before retiring in 2018 and have done my share of traveling to get an understanding of the world we live in. I've cycled Europe, 1/3rd of the U.S. and have taught in Japan. I'm married and have a daughter who attends uni in Canada, and a friendly Aussie cattledog -all females! As the only male in the house, the ladies have taught me to be considerate-like putting the toilet seat down when I'm finished.

As Shakespeare quoted, "The world is your oyster" and in my travels, I've been blessed to have stayed in people's homes all over the world. Couch surfing is my way of giving back. Karma, neh?