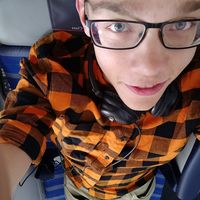 I'm a computer science student at University of Tartu.

I want to sleep like a normal human beign and have showers every once in a while. Mostly I will be camping in nature but that might not always be possible. I also like meeting new people and I believe that to really appreciate a different culture, you have to get to know some of the locals.

I've been interested in game development since I was a kid and that motivated me to learn programming when I was 13.

I'm friendly, love having discussions and I'm always interested in how other people understand the world. I also really love cooking.