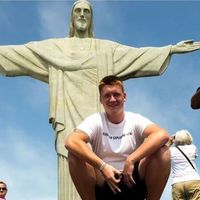 I am traveling on my own and as a student you don't have so much money. So I make the best out of it and just enjoy my trips

Just explore the World and create some unique and nice Memories

Played one year American Football on a high school!
I successfully inked myself as well :D

Experiences about previous trips and give some advices. Also some German dishes , drinking games and recipes against hangovers.