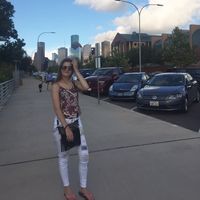 I'm an absolute fan of traveling and meeting new people! It's so cool to learn something new about other cultures!