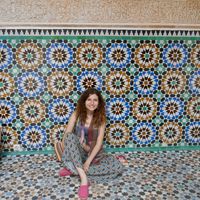 Hello! I'm Elena,
I'm a law student with a great desire to travel. "Officially" I've started consider myself a traveller four years ago after having traveled around Turkey,. I've also taken part to lot of Erasmus+ Project, which is an experience I highly recommend!
All my friends usually say I am splitted between a party(harder)-girl and a philosopher and I really like this definition of me: I can share with people both funny moments and reflexive ones.

N.B.: I was forgetting to point out that I'm a backpacker, i like camping, hiking, cities, naturalistic places, well i actually love all the things that our planet Earth host! :)

I'm on Couchsurfing for two main reasons: the first one is that I really like to meet "local" people when I'm abroad and share time with people who can always suggest me new experiences that are not so touristy; and the second is that I want to host people from the whole world at my home.
But the most important reason is that I want to change my life with all the things I share with all the people I will meet, indeed sharing "travels-stories and life adventures" is one of the things I love the most!

I'm really open-minded so I like to read any kind of book and the same is true for music and movies: every new suggestion is always welcome! Of course I also have my preferences: if you want to know something more about them, maybe we can talk about our interests in front of a big cup of coffee, do you agree?

okay but just to give you a hint:
Books' author: Haruki Murakami (but I love at least three other writers, hold on and meet me to know more!)
Music: wanna the truth? I think that our approach with music changes with the different situations we found ourselves into, so I cannot say which is my favourite music but I have several favourite musics-moments!
Movie: several years ago i've started two lists, one for the "film i've watched", the other for the "film to watch"...well they both grown a lot as I was and still am truly a passionate!

have you ever heard about the new sport called "The angel flight"? I've tried it for the first time in Portugal, it was something amazing I've felt completely free! I've also tried reverse-jumping (that is the opposite of bungee jump), the adrenaline was so loud that my legs have shaken for hours!
Another fantastic thing I did was explore the Sahara desert on a camel's back and I spent one night in a Bedouin's tent in the middle of the Sahara Desert! did you know that the sand of the desert doesn't burn feet, strange isn't it? :)

I live in Trento because of my studies, but I can also host people in Treviso, my birthplace, (near Venice) when I come back to my parent's home. So I can show to my guest lot of beautiful places both in Trento and neighbouring areas, and in Treviso, Venezia, Verona and other cities of this part of Italy! :)