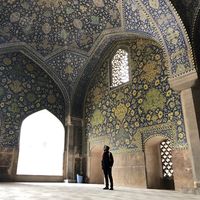 I come from the south of Italy, exactly from Sicily and I've been living in several cities of the north Italy since 2014 when I chose to attend a postgraduate course in Work Psychology in the University of Turin. After that I've lived in many cities because of my work and meanwhile I attended a Human Resource Master in Milano. Right now I live in PAVIA (University city closed to Milano) and I work for the Amazon Human Resource Department. I'm totally addicted to know people with different point of views about everything discovering new cultures far from mine. I love discovering historical and natural places I didn't know before but in the meanwhile I like going out during the weekend with friends .

My first time with couchsurfing was last year when I've been to Iran. I chose to use it because I was so interested to live and understand their culture. I spent 2 amazing weeks with many Iranian families knowing deeply their culture and their complexity.
After this amazing experience I like using it to meet new people to share different interests, great stories and having fun.

Too many to explain ( I prefer show you in presence ) :)

There are many things but the most beautiful has been discovering all sides of Iran alone being hosted by many Iranian families with amazing differences among them :)