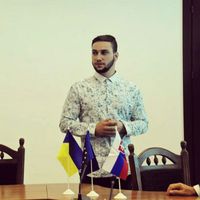 I accept guests, this is my number +421907667625 in case of urgency call.
My name is Tamerlan.
I have 2 higher education master's degrees. (Computer Science and Business Analysis in Information Technology.)
I live in central Europe in the city of Bratislava, Slovakia.
My mother is Russian from Irkutsk, it is near the deepest lake in the world of Baikal.
Where the cold on the thermometer reaches -52 and more, and the father from the indescribable Caucasus Mountains, which are located on the shores of the Caspian Sea.
I have lived in 9 different countries and in many cities that have lost count.
I know 9 languages ​​and understand about 13.
I have vast experience in various fields ranging from: Photographer at sea, with very famous hotels in Turkey: Analya, Alanya, Kemer, Goynuk (Orange County Resort, Crystal Aura Beach Resort SPA, Hilton.),
Sushimen in the Follow-up SU-Chef by one of the famous restaurant chains in Ukraine in the city of Kharkov, Kiev (Yakitoria, Mafia.),
I have experience in construction, I can do everything except plumbing work in the city of Baku in Azerbaijan, Guba in firms like (North-West, Pasha Holding.)
In the agrarian sector, I’m also not bad at it. I worked on watermelon, mushroom, potato, cucumber, flower, etc., in plantations mainly Russia in Krasnodar, Yeysk, Rostov-on-Don, Anapa.
I also worked in the restaurant business, starting from an officer, later as a senior administrator and quality manager, mainly in Iran in the city of Astara.
And also a translator with the world famous Designer with
Cyprus Chengiz Kaptan.
Now I have a stable year and 14 months I live in Bratislava and work in the field of information security, it is like a programmer but cooler.
I can still do a lot of things, and if not, I’m learning quickly and in all these areas I can help you if I need to.
In the former two-time champion of Azerbaijan, the Greek-Roman wrestling. I proactive love to cook, travel.))

I don't really do this to save money, I can afford an Airbnb most of the times.

I'm doing this mostly to meet new people, learn about their culture and way of thinking and make possible international friends.
Solo travelling is good but you always feel the need of someone to spend some time with, show you around, share a good morning coffee or a beer with, exchange ideas and most importantly laughs and smiles.
I cook delicious, as a chef in the former.
I want to be free.

I often travel just by getting up and realizing that I need to do this and that's it.

I can reinstall the operating system like Windows or diagnose your computer.
Talk about the basic protection of your personal data, since now information is more expensive than any asset.
I am a professional to protect your personal data from theft.
Do Thai Traditional Facial Massage - I am a professional and have a certificate.
I can teach all the languages I speak.
I can teach everything about cooking gourmet meals or photographing.

Food, Knowledge, Mood, Natur exchange.
My knowledge and contacts.
I respect the space offered to me and your personal belongings.