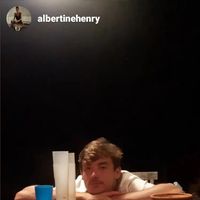 Long time no see.
I think I had my best experiences of Couchsurfing in Romania and Lebanon two to three years ago and I think it's time to renew the game. I moved in Alexandria last month and it will be my new hometown for the next 5 years.

For once I have a decent place to propose, and so I'll be glad to share and host travelers, as long as taking them through the mysteries of Alexandria. (Sure, bars also count as mysteries).

I have a few life goals (or guide lines, I guess I don't see the difference) which I'll arbitrary choose to describe myself :

1. To live a thousand life before I die. For real, to give you a hint, last month I was still the assistant of a mentalist touring in France, Switzerland and Belgium, now I have a position of photographer-videographer of archeology for french research in Alexandria. No transition.

2. To make my tales come true. I'm actually doing filmmaking and underwater videograhy, writing numerous dark (though much couloured) tales in French and English. (Spanish and egyptian dialect are also an option) I do short films from years and I wish to direct the real shit some day.

3. To bring goodness to the people I meet on the way as for receiving it when it comes up. Actually the two other goals are worthless without it : what's the point of telling stories depicting people's lives, dreams and love if you don't live it yourself ? It's safe to say I'm goodhearted, easygoing and curious, that people I share moments with, being friends or strangers, have in common to bring a lot to my table and that in any case I rather spend my moments with utter delight, 'cause you know, we all gonna die.