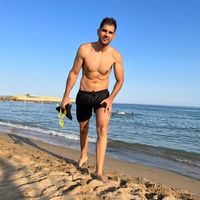 I am an English teacher who works in a Primary School in a town nearby Granada. I’ve never been couchsurfing before, however I’ve hosted many of my friends that I’ve met abroad and all over Spain. I live in an apartment in Granada in a new area of the city very well connected by bus and tram with the city centre. Be my guests!

Because I like meeting new people and showing them around

I like sports, good music and hanging out with my friends. I love skiing and snowbording during winter time.

I like listening to all sorts of music but I am more into indie, pop, electro and rock.

I’ve been snowboarding in Banff, Canada and scuba diving in the Great Barrier Reef in Australia