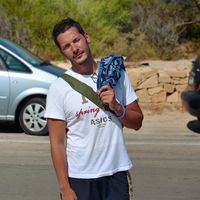 Nice italian guy here, I live in Milan but I was born way further south. I like meeting new people from all over the world while visiting other countries and cities, and Couchsurfing seems a nice way to do both things. I consider myself friendly, polite and extroverted but never intrusive or expansive, I like hanging out and passing time together but i don't mind being on my own. Here in Italy I've got a small but cozy apartment on the canal just outside of Milan (but still close to the city center) and a nice large couch. Other random facts about me: I lived in Utah for three years, I prefer underrated cities over touristy ones and like both icebergs and beaches. I love pop music and television.

Here to improve my opportunities to travel around the planet while meeting and hosting people from foreign countries, so I can make more friends and connections with the rest of the world.

I like travelling and gettin ti know nice and polite people,i like ti swim and water Parks, movies and all since fiction

Pop, ReB, hip hop music lover. I Also like superhero and horror movies, but I watch everything.