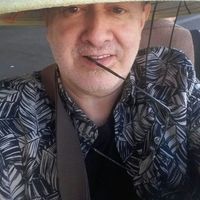 I am South American born and raised in N.Y.C. I've travelled and lived abroad most of my life.

My immediate reason to sign up here is that I would like to go to Paris for 2 days very soon and hotels are too expensive, to be truthful. *****I went and had an amazing 1st couchsurfing experience. Now I'd like to host people, too!

From August 28- Sept 4......I am planning a further trip to Madrid.....one of my favourite cities in Europe. Any nice host/s around?

I would also like to host people at my 3 room flat in Frankfurt, but would only accept non-smokers as a basic condition :-) New info: I wrote to 2 people who were seeking a place and accepted both. Neither responded until it was too late. One said he had s.th. /the other said he's sick.
I kindly request people to get in touch who REALLY want to stay over as guests, but also hosts should PLAN things slightly ahead of timr and it shouldn't be like just having a free hotel. Mutual RESPECT is a great basis.
:-)

Most things mentioned in intersts!

Visiting Acapulco and seeing the beach from a KITE as a teenager was an utterly UNFORGETTABLE experience that I really treasure. Going to Rajasthan on my own for a month! I LOVE India...Indian people, their food and CULTURE!
Asian cultures generally attract me very much.

Spending my childhood (from 3-14) in New York City gave me the basic energy to enjoy the rest of my whole life. It gave me wings! I was brought up visiting museums, art galleries, concerts and most marvellous of all.....the THEATRE! Off-Broadway was tops!

I love English, I´d like to learn Chinese, my home is my castle. I am willing to
share with people who are able to appreciate my spaces and this lovely and tiny city-----Frankfurt.

So huge to some, so ideally located, and so different to other cities in this country. Hamburg, of course, is
awesome, but to me, the weather doesn´t quite do the trick. Frankfurt has far milder winters.

Conversation in 4 languages and taking part in expenses when visiting your home.
I love cooking for people &amp; can show my appreciation to friends and certainly to future hosts who
don´t even know
me, but invite me into their own castles, by cooking something healthy and tasteful.