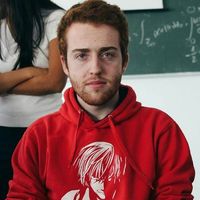 Hello everybody.
I'm Juanjo and I'm going to study Science Polique in Amiens for the whole year. I like to meet new people and specially to have a good time with them as long as they want it too.

I want to travel, meet new people, new cultures, new worlds, new places to wake up....World is wonderful and everybody should know that.

I haven't hosted anyone until now, as I am new here. I hope that people find my place quickly! I also want to travel around and meet new people in their places, but it only makes sense if I return the favor much more!

What about the works of arts I'm immersed right now?

One Song: La Mauvaise Réputation by Georges Brassens
One Film: The Remains of the Day by Jame Ivory
One Book: A Moveable Feast by Ernest Hemingway

I'm the typical guy who love to start a conversation about politics in the middle of a party when everybody is super drunk. At least, I could tell some interesting or geeks facts and things about international politics or economy.
I worship cinema from weirds countries.