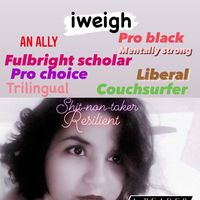 Vaccinated x3
Currently, I managed to find an apartment 5 minutes from downtown Freiburg. I was lucky to have a separate room for couchsurfers. Now, a brief intro about me: I am basically a nomade and a generational cycle breaker. I don‘t believe in myths that have a divisive nature i.e religion, nationalism, etc., but rather on whatever brings people together. Let it be film, native intelligence, music, pain, joy, sex, curiousity, etc. I prefer patience and understanding and peace making than rolling eyes and claiming superiority over other nations, cultures or people. I believe it’s ok for people to ask bombshell questions and not get cut off at their questions because they might sound ignorant. Everyone has the right to ask so they get a chance to evolve, I agree with Jameela Jamil on that so, my head is a rolling eyes free zone.
I am trying my best not to follow the extreme “self-love“ trend on social media that promotes pretty much cutting people off your life right away or not dealing with people who are not “up to the standards“. In my eyes, everyone is unique and different and interesting. I just look closely and listen carefully. I don‘t feel comfortable around people who criticize others let it be their background, way of thinking, life styles,etc.

One cause I stand up for very firmly is the Palestinian cause. I stand with women including Palestinian women in getting their very basic rights. I reject colonization in all its shapes and forms and that does Not mean am anti-Semitic. I am a semite myself. I stand up All the way against Apartheid/racism/massacres, and genocides.
“The planet doesn‘t need more ‘successful‘ people, the planet desperately in need for peace makers, healers, restorers, story tellers, and lovers of all kinds” Anonymus.

I used to host people I meet on the way before I knew about the app. When people who knows nothing about each other meet, have late night chitchat and talks, it‘s almost always their true selves that‘s talking. What‘s better to hear than “I have never told anybody about that before“ knowing that we won‘t judge. Knowing that there‘s nothing to be frowned at helps people set aside their fear of judgment and feel free to open up.
( Important: 1- Couchsurfing is not a way for me to hook up)
( 2-Please go through my profile. I won’t be so excited replying to His and Heys and holas, I would appreciate decent detailed messages of why you would want to hang out with me or be my guest. Please don‘t send me your number unsolicitedly, I am not gonna call you!)
3- I don‘t do anything for a good reference. I don’t wait for references. Also, having too many references doesn‘t say a lot about Couchsurfers, that‘s what I have come to realize. I also won‘t write a reference that includes descriptions like nice, cool, great, respectful, etc, if it was just a short hang out and I didn‘t have a clear picture yet of who am I dealing with. However, some hang outs are extraordinary and one can‘t just help themselves but to write about it. If you don‘t have any references and you‘re eager about Couchsurfing and we just hanged out once, I might write a reference letter as a gesture of encouraging you to invest in the community.)

Chitchatting about the universe and the small details in life. Interested in evolutionary biology, geoegraphy, sexual orientations, Gender, and women rights. Into literauture, languages, and Linguistics, Education (and all its branches). I love watching stand-ups, no matter where and no matter who the comedian is. Being able to be a comedian and make people laugh shows intelligence.

And still doing: deconstructing, on a personal and an intellectual level, the patriarcial idea that there’s a male god out there for everyone to worship.

Managing one of the largest Asian and Chinese media platforms to Arabic-speaking countries.

Doing my M.A in Linguistics in Germany with No financial aid💅🏻

Deciding to adopt at some point in my life.

Deciding to keep fighting the cycle of passing any generational injustices that I suffered from to the next generation or even allowing them to spread.

I speak English, Arabic and Deutsch and am open to yours especially if it‘s spoken by an ethinicty around the world.
Bellydancing!

My doors are open whenever and wherever possible. If I have an apartment, you get a room. If I have a room, you have a couch. If I don’t have a couch, let’s create one.
I am a tea lover and I come from a tea culture and the deal is we don‘t have to drink alcohol to lower the effective filter and feel excited and be chatty..my effective filter is down by default and I don‘t treat my personal life and beliefs as top secrets.