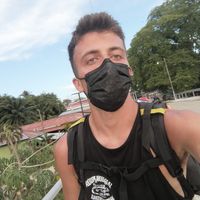 Hey everybody!!! My name is Dídac and I am a 23 year old backpacker from nearby Barcelona :) I have been travelling as a backpacker since I was 17 years old and I don't think I am putting an end to it so far. My ultimate passion is getting to know anything about your culture or ethnic group, as I studied Cultural Anthropology, finishing one year ago. Now I am focusing into war photojournalism, but I am conscious that it is a long way to go.

I have been to 54 countries on my 23 years and I want more, but that's my first time actually in Couchsurfing. I have done so many workaways but never got started on this. I understand that most of the people want someone with reviews, but if you have never done it it's impossible to have some hahaha.

I love travelling and I think that the best way to do it is by experiencing real life in the places you visit. What's the better way to do that? Sleeping in some local's couch!

I love cooking and learning about your local cuisines. I can show you some delightful Spanish recipes and you can teach me about your favourite dishes :)

If you are learning Spanish or you're interested in Catalan (my homeland's mother tongue), I will be glad to practise with you!

Let's talk during hours about life and have a beer together!