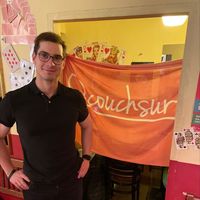 Hi I am Moritz, originally from Bavaria, Germany but have been living in Vienna for 20 years, so basically my whole life.
What do I do ?
A jack of all trades is a master of none, so they say, however still better than a master of one. I basically try myself at many things, be it Karaoke, Cooking, Video Editing or Repairing Electronics.
Everybody has something to teach or show, that’s why I want to get to know people, their culture and their interests.

I do not smoke and would appreciate it if you didn’t either, at least not indoors (this only applies to my place).

I appreciate a good challenge, so if you are into sport, it’s on.

If you haven’t heard them, try saint motel. Also, and I probably don’t have to mention this, Weezer and red hot Chilli pepper.
For movies I guess CUBE, I know it not everyone’s 🥤of T.
I should read more, period

Starting in 2019, when you know what happened, I started tinkering around with Electronics.
Lo and behold 3 years later, some friends and me created one of the biggest community’s for computer graphics cards.
Ever since I started to repair gpus, or electronics in general for that matter, I got hooked on it.

I’m not an engineer just an enthusiast, but as with so many things, that’s how it starts 😏

Anything I can share, I have a pretty nice workbench if you want to try yourself at soldering or electronics repair.
This is of course not a must, but a new experience nevertheless 🙌

Everything from going to the gym, to swimming, singing cooking or gaming although I don’t game much anymore. So you’re gonna have an easy time beating me.

I have a nice kitchen where we can cook together, I try to stock up on things, but if you buy what you use, I would appreciate that ☺️