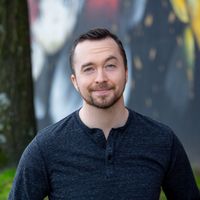 ABOUT ME
I think the world needs more real estate developers who actually give a @#$%, so I decided to be one.

When I'm not working - and I work a lot - I'm usually down for a good time. Typically outdoorsy or active things, singing and playing guitar, occasionally making art, and in general exploring new things, enjoying the moment, and loving life.

PHILOSOPHY
Anything can happen. Treat life as a "now or never" matter.

HOW I PARTICIPATE IN COUCHSURFING
I'm just using this site to sell Avon and convert you to Baptism. :-P Joking. I surfed a bunch in Europe after college and hosted a bit after returning, plus I've been in the Atlanta social group since 2008.

Biked the western coast of Ireland. Haggled in a Moroccan medina. Slept in a barn in the Swiss alps and ate cheese fresh from the farm. Jumped out of a plane in Interlaken - over the Swiss alps - at sunset. Got attacked by a little octopus in Italy (unsuccessfully). Drank cheap wine and played guitar under the glow of a moonlit French basilica, starting with a handful of hostel friends &amp; being joined by locals dropping by with a bottle of wine, until late in the night when the police told us all to go home haha.

I like to buy hosts a meal. Hosts are the lifeblood of this community and it's a nice little way to say thanks, plus to spend some time together and explore your home town.