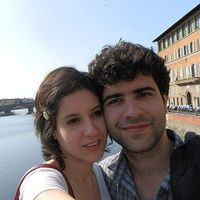 To enjoy life and love, to travel and meet new interesting people.

We are a couple from Brazil, who loves good conversation and finding out unusual or unknown things about different cultures. We love to talk about and discuss music, art, politics but are pleased to talk about everyday things. We love a little drinking and having fun.

Find something useful to do with what we studied. Cultivate friendships and adopt a dog who will be called Monkey.

We are deeply supportive of the Project's ideals of creating great friendships and promoting worldwide solidarity by means of a couch. Plus, unlike other social networks it doesn't pretend it's doing something great for humanity just to sell you stuff you don't need. The world could do with more websites like CS.

Well, we've travelled to many interesting places in Brazil counting on the good will and the couches of some lovely people. We did run into a religious fanatic on one travel, but she was of the non-satanic ritual type fanatic. Lucky us!

We've been members of the CS community since 2007 and have been active since then. We've had wonderful experiences surfing couches in Sicily and Tuscany, Alsace and Paris as well as in Germany, the Czech Republic, Turkey and Greece. We've also hosted some amazing people from France, Germany, Brazil, Finland, Slovenia and many other places.

A giant steak at "El Obrero" in Buenos Aires, Argentina. Sand dunes in Northern Brazil (Lençois Maranhenses); La fête du sans fête: New year's 2010 we spent with a bunch of people we never saw before in Paris that also had nowhere else to go; Surfed the couch (not through CS, though she would have an interesting profile) of a religious fanatic in Teresina, Brazil; Carnaval in Rio; Eating at the Mensa of Pisa university for free (5 course meal); To be in Berlin, the best city in the world. The quintessential French experience - making Foie Gras: Amazing things - Sticking my hands in a Foie Gras (Carol); watching from a safe distance and seasoning it (Victor) - Thanks Pierre and Juliette!!! To eat fondue in the montains of Savoy, to experience real friendship (Thank you Jo and So!!!). To surf the couch of someone you hosted on another continent... simply wonderful.

We can teach and will eagerly learn all things considered useless in monetary terms: we can teach portuguese, can share things about our trips and would love to learn to be better people by getting to know you.