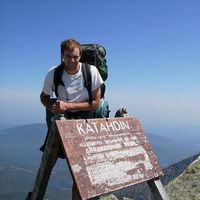 Surfing, mostly up til now. But would like to host more, so if you're in the area, drop me a line.

Started couchsurfing during my hike of the length of the USA back in 2007-2008. Have since surfed all over Europe and have had nothing but great experiences.

Alex Trebek hit on my ex-girlfriend.

I can teach you how to get on Jeopardy, how to bake a mean chocolate chip cookie, some german, lots of useless information, my plans for world domination - mwahaha!