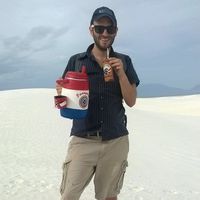 I recently moved to the District after a whirlwind eighteen months between jobs. I spent the last eight months abroad. The first four months I was in Europe traveling and living with my brother in Vienna, Austria. The last four months I managed to get stuck in Paraguay with a former couchsurfing host who is now like a sister. Go Couchsurfing!

Prior to my eighteen months between jobs I worked as an urban planner in Las Cruces, New Mexico where I hosted regularly.

Before Las Cruces I was traveling throughout Western Europe for 6 weeks looking at shared space and woonerfs (Wohnhofs) in Germany, Belgium, Holland, and the UK. I am working on my Master's in Regional Planning Exit Project, "Shared Space In Translation: The Transatlantic Experience". I received a grant to pursue my research tentatively titled, “Shared Space Across Borders – A Practical Guide to Implement Shared Space in the USA based on Lessons Learned from Europe".

I served as a Peace Corps Volunteer in environmental education in Pilar, Paraguay from 2008-2012. I was working primarily in city wide trash management with various governmental and private institutions. I spent two years working specifically with a project called Zero Trash=Healthy Schools; Basura Cero=Escuela Saludable.

Trying to live without regret and in the moment. Taking life day by day. Believe me, it is harder than it sounds. In the end, my goal is to live life not for things but for moments and experiences. And most importantly, leave the planet a better place than when I found it.

I love couchsurfing and have surfed and hosted in the USA, Europe and South America. I hosted 30+ CSers in Pilar, Paraguay over the last 3 years, a lot considering Pilar is in the middle of nowhere. I have surfed a lot as well but lost count a long time ago but I know its 50+ CSers. I was involved in CS Asuncion Group while in Paraguay. I love to meet new people and experience new cultures via couchsufers. I have spent the last 5 years promoting Couchsurfing among Peace Corps Volunteers,a fellow travelers, and Paraguayans alike. Wherever I go I always try to make it to the CS Meetup!

Extremely positive! I forgot count of how many times I have counchsurfed and hosted. I also really love the community groups. Great way to get to know the heart of any new place!

visited 29 states (12.8%)Create your own visited map of The World or Free ipad travel guide