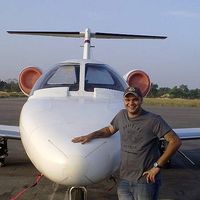 To fly a single engine aeroplane across africa

It would be sad if i could fit everything about me in here or even think about doing so.

Having said that, i believe in finding that connection with everyone i meet.

t is my dream to travel the length and breadth of Africa in a single engine aeroplane all by myself in the near future. Which is the reason i took formal training to be an Airline Pilot. This sort of allows me the money and expertise to go on Aerial Expeditions across the vast unknown!

As a kid, i spent over a decade in East Africa, a few years in NZ and sometime in the countries in between.

I've been told that on appearance its hard to place where i'm from, maybe thats because its a question which has too many answers.
Eventually, we're all going to look the same, i just got a head start :)

I love aeroplanes, music, travel, motor bikes and blah blah blah,.. let me just fill you in when we meet.

i believe i have atleast 500 years worth of past life karma dues. this leaves me without an option when i have to make a choice. there are a few principles i believe in but don't mix this with ''Nay Saying''. I will try everything at least once and i try not to harm anyone intentionally.
-
Try and taste all the beers of the world before i kick it.
-
Fly a Single engine aircraft around the world.

I believe borders are over-rated. i will never let a traveler feel out of place if i can help it.

i host as many people as i possibly can.

most surfers are now good friends
-

the couchsurfing experiences i have had have taught me a lot about the people i've met and my boundaries and limitations dealing with people.
its been an amazing learning experience so far. and i believe its as much a self discovery curve as it is discovering someone else.

I have been lucky to find some amazing travellers along my way thanks to CS. One such trip left an awesome taste. Random people meeting on CS and travelling on an impulse trip to Swaziland from South Africa.

Eddie Vedder, U2, Fleetwood Mac, Regina Spektor, Joshua Radin, Josh Ritter, Ryan Adams and mostly anything that is Adult Alternative Rock.
One of my Favourite songs is Redemption Song by Bob Marley.
Shawshank Redemption, Into the wild, Hunting Party, Top Gun, Blind Side, Star Wars and basically any other movie in the world. - movies

A time to die - Wilbur Smith
Not a Penny more, not a penny less - Jeffery Archer
Gone Tomorrow - Lee Child

Part of a Rescue team which found 2 stranded women at 18,000 feet and the look in their eyes when we found them was priceless.

i can teach you to survive in East Africa, India and how to use a Royal Enfield motorbike. i wanna learn to live without any strings attached. i want to share everything i have. I would love to be a walking cultural advertisement and spread the little knowledge i have.