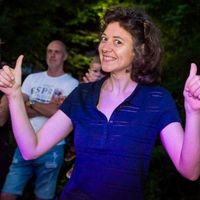 on a quest for nature, new impressions and having fun

I'm 38 and live near Antwerp and Brussels in Belgium. I studied political and social sciences in Ghent. Currently I am active in gardening, woodwork and a bit of yoga. What I mostly like is travelling, learning new languages, meeting open and nice people. Having an inspiring conversation. Being outdoors, cycling, hiking and swimming.

There is no tomorrow.

I don't have a couch in my tiny house.. But I' m in for a cup of tea and meeting new people. I like traveling the world. And if the world travels to me, I 'll be its guide!

I`ve done some couchsurfing in Ireland, France, Germany and The Netherlands and had a great time doing so. I was dragged into Irish pubs, children's puppet shows, a guided tour through Belfast, encountered an Irish singer in a local's pub, a French Bask, a Spanish/Dutch street dog, the most friendly person in the whole world being an American, a Latvian duo willing to introduce selfmade beer in their home country and felt very lucky and amazed, every time again.

BOOKS:
The catcher in the rye
Little green Man
Love, in times of cholera

I guess I like to travel really slow.. I was:
Five weeks in Northern Ireland / Some month in Berlin / Three months in the Pyrenees (France) and the north of Portugal /One month in Spain.

I loved hitchhiking in the French Pyrenees, being it the only possibility to get around.

How to make a cup of nice mint tea? Collect a nice kind of mint, one you like (fresh), sugar (or honey), a bag of normal or herbal tea, clean water. Boil water, put some sugar (or honey) in your cup, add fresh mint leaves (a lot), add tea bag. Pour the hot water in your cup. Leave it a few minutes like this. Then pour the tea over in another cup an again in the first cup. Over and over again, this is for mixing all ingredients and get some oxygen in it. Enjoy!