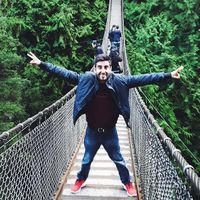 I'm a positive person, never say no to party, maybe this is not good always... I try to live life the most, you can never waste an opportunity to be with your friends, to know new friends, and to share knowledge, friendship, life! I like to enjoy the world as much as I can.

I participate sharing my expiriences, and the expiriences of my friends in couchsurfing.

Hosted indirectly friends of my friends that are not in couchsurf, I didn't knew them before but was a very good experience.

I have couchsurfed with some new friends, all the people has the disposition to help and to know another people, i liked to help some German friends to improve the Spanish just speaking Spanish with them also we have had very good meals and dinners, couchsurfing is the best!

Books:The Godfather, 1Q84, Le petit Price, Vampire Chronicles (Anne Rice), Dan Brown, Gabriel Garcia Marquez, Harry Potter, I'm kind of bestsellers person... but i can read the back of my cereal with a lot of pleasure.

To be up in the Arc of triumph in Paris, and to imagine all the Napoleon's army marching in the streets, I just like history.

Clapping in front of Kukulcán temple at Chi Chen Itza, and hearing the Quetzal... just amazing, very proud to me Mexican.

Not eaten a chocolate in one day...

I can teach/learn more spanish, french, english and italian, some mexican food, some funny moves at the dance floor and plenty of funny and suicidal stories about my trips!

I can always cook something, practice english, be a good host and maybe some tequila if I have it with me. Tacos also tacos..