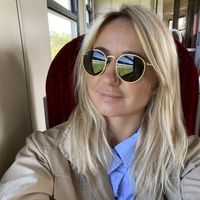 Can never stay in one place for longer than 6 months. Addicted to motion. When I can't travel I let the world visit me, how? hosting cs'rs of course.

"The very basic core of a man's living spirit is his passion for adventure. The joy of life comes from our encounters with new experiences, and hence there is no greater joy than to have an endlessly changing horizon, for each day to have a new and different sun." OH

Having Pawel in Israel on Christmass Day, great guy in teh end of his journey opened orphanage in Kenia, he gave me sort of bible of very traveller "into the wild". For me couchsurfing is not only staying overnight it is also getting to know the world, the people, cultures, food, amazing - everything about CS.

Surfed couches in Paris, Malmo, Tel Aviv.Hosted when I had possibility, even when the landlords wre not so enthusiastic about couchsurfers, as I was:).

the unbearable lightness of being

One amazing thing happened while couchsurfing in Paris, me and my 2 friends bought french wine,cheese and bread and made a picnic right over the Eiffel Tower, we met wonderful people there, and they let us ride on thier bicycles round the tower! On the way back 'couch' we accidently jumped on a party in the metro. That was an unforgetble night.

I can host from 12th of February