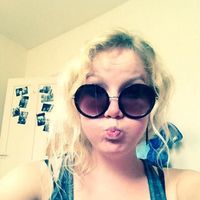 I'm outgoing girl with a bubbly personality. I come from Finland, but nowadays I spend more time abroad than actually at home.

I have tons of friends I love to hang out with, and experience new things. When it comes to meeting new people, I might seem a bit shy at first (must still be the Finn inside me), but when you get to know me, you'll have a hard time keeping me quiet. :)

I love meeting new people and immersing myself to the local cultures, and for that I considering couch surfing being the best tool.

I'm aware that I don't have much couch surfing experience despite the fact that I have been involved to this for quite a long time, and it might seem suspicious for some. However, the truth is that I haven't needed it yet, as my friends have insisted on hosting me when i have visited different countries.

But now I'm traveling solo in a countries where i don't have friends yet, so this is the perfect opportunity to try it.

Dancing, eating, singing in the shower and other similar basic stuff.

Pretty much any music, except maybe country, and super heavy metal.

I guess the most amazing thing I have done is that when I decided to move to US as an exchange student.. New environment, new school and new language.. And I survived.. So I think that was pretty amazing for 16 year old girl...:)

"Positive anything is better than negative something"