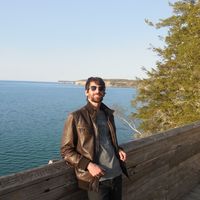 I studied all kinds of social sciences through political sciences and cultural studies. I wrote one memoir about a squat collective in Paris. Then, I wrote a PhD thesis about the structuring of the creative industries in Detroit and the role they have in the recent urban change in this amazing city. It took me 4 years, probably the most interesting, challenging, and the best years of my life so far!

Now I have been a Teaching and Research Assistant in a French University (in the parisian banlieue !). So basically, I prepare and teach classes about communication, media studies, creative and cultural industries...

I try to understand better (which means through experience) the concepts and reality of Time, Space, Love, Heart-Mind-and-Soul, Unity, in order to live my life in harmony with myself and with what surrounds me: other people and nature.

I want to share ideas and good time with people. I believe in trust and I think the more we spread trust, the more people will trust each other. Same thing with respect and love. CS is a good way to do that.

A night in the Maroon's village of Accompong, Jamaica.
Also, opening a squat in Paris with a group of courageous people.

I can teach French! and I can share some knowledge about the history of culture and the media. I am getting better and better at cooking, so I can share some good recipes.
I would love to learn how to sample music!

Moments in life. It can be anything...