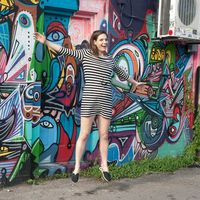 Hey there! I live in London (UK) and I travel during the 17 weeks of vacation I get per year. Yes, that is nuts. I'm Canadian as hell (interpret that how you may) and generally like talking to people and doing stuff. Lately I'm travelling alone a lot and home swapping rather than hostelling, which makes it harder to meet people. Hence, I am doing this :)

To make friends when I travel alone

Again, to reiterate, I enjoy techno and house... as for movies, I'm super into comedy of all kinds... and comedy TV... and standup... so like Louis CK, Judd Apatow movies, Comedians in Cars Getting Coffee, Norm MacDonald Live... Saturday Night Live... Rick and Morty... Archer.. I dunno, all of it. Also into basically any movie... no horror... and as for books, lit fic... and the news... major news junkie.

Cycled 1450km alone self-supported through the Austrian and German Alps for a month.

I'm a science teacher... can teach you alllllll about that. And about bicycles.

The gift of laughter. Also, humility.