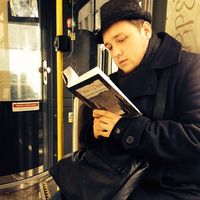 Travelling with this cool girl!
https://www.couchsurfing.com/people/immilmar
--------------------------------------------------------------------------------------------
Please come sit and listen! Let me tell you the story! One little boy didn’t know the way to choose for his life: on the one hand he liked essential sciences in school, clever books and planned all the things for his future. On the other hand he liked stories about mighty warriors, wise elves and cruel dragons, school theater club and spontaneous adventures. He studied 4 boring years in an engineering university but at the same time he was writing scripts for role playing games and other events. Then he moved to another country as he expected things to change but in 2 years of studying other boring stuff he realized that nothing changed except language people are talking around. And then he had an opportunity of his life and he was brave enough not to miss it. He took his backpack and went to the edge of the world!..
(This boy was me)
I’d love to tell you the end of this story by person 😉

To have the pleasure of constant new amazing experiences, cause all the people are so awesome.

Once i got a book: "101 Things To Do Before You're Old and Boring"
I need your help with some of them:
• See a ghost
• Invent a new trend
• Become a spy
• Start your own secret society
• Make hitchhiking + couchserfing trip

TEACH YOU HOW TO:
• Pronounce Russian sounds
• Write your name in Russian
• Play Russian card games
• Use vkontakte (betterFacebook)
• Say basic phrases in Russian, English, French and Czech, as well as in some other languages.

TELL YOU:
• About our home city
• About your city
• What does it have to do with Russia?
• What kind of fish are you?
• Where to go to Russia, if you want to see * enter the necessary *
• What is the meaning of the Malevich square and something else about art

DRAW:
• Sketch of tattoo
• Your portrait
• Your portrait in ancient Russian style
• Your home
• Illustration
• Mini comics about your life
• Postcard
• Wallpainting
• Fish
• Mishka
• Horse
• Cete
• Any other cute animal
• Or not an animal
• Tiny sun or cloud
• Sketch of personal stickers for you
• You being in the cosmonaut's suit. Poyekhali!
• A cool business card in Latin or Cyrillic, or even in Elven language
• Not-scary-at-all monster

WRITE:
• A little poem for you or about you (with illustrations)
• Translate your poem into Russian
• A paper letter in a beautiful handwriting style

CRAFT:
• A book or mini-album with drawings or poems
• A paper doll with a pair of suits
• Magic cloth-doll-talisman. Russian magic!
• If you have knitting needles and yarn, we can tie a small piece of fabric (because we will not have enough patience for the whole scarf 😨)

RECITE A POEM:
• in Russian (on the topic that you like)
• in your language (it will be fun at first, but then we will reach either to perfection or to despair)

COOK:
• Some crazy russian food like okroshka
• Or something normal (pasta e.g.)
• Antosha - best Moscow'ish coffee
• Tinysha - delicious meat from meat ^_^
• A national meal of your country so you can put it on YouTube and collect 1million views

SING FOR YOU:
• Any Disney Princess song in Russian
• A couple of lyrical feast songs in Ukrainian
• Russian rock
• Russian song you are associated with
• Eurovision songs
• Anthem of your country or other song in your language (we will try hard)

TAKE A PHOTO OF YOU:
• With Tinysha in fairy costume
• Du jour

GIVE YOU:
• A small luminous garland
• Russian souvenir (notCaviarOrMatrioshka)
• Advice in Russian fashion

• Play Blizzard games you like
• Show Russian movies that you may like. Or not. Just watch a good-old movie

LET'S TALK
• If you want to talk about it