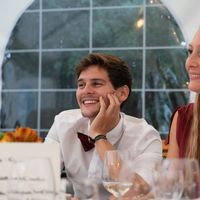 REQUEST
Please don't request more than two weeks in advance. We don't plan that long ahead :)

Hey guys, we are two 27 and 29 year old folks that moved to Stockholm two years ago.
We would describe ourselves as a relaxed and open-minded couple interested in travelling, meeting new people and making new experiences ;)
Cheers,
Hannes and Carina

It also feels like being on a journey with meeting new people in our surrounding although we're staying at home ;)

We think that you have the big possibility on couchsurfing of getting a city known the best - by locals who actually live in it and to make friends for a lifetime.

I (Hannes) love to play the piano and the ukulele.
I (Carina) love to listen to his play.
On hot summer days there´s nothing better than a beachvolleyball match (Hannes) -swimming (Carina) and afterwards a cold beer ;) (both!)

Travelling and open up your horizon.
Here a video of Hannes and his brothers trip through New Zealand:

Riding a motorbike from South to North Vietnam!

- joining a city feast with some man putting a wheelbarrow with an imense load of starting firework on his back, running around with it - GUATEMALA

- carrying home my wasted host after a night of partying - USA

- sleeping in a private tiny wooden hut beneath a Vulcano - PHILIPPINES

- diving with our host as an instructor - PHILIPPINES

- running through a monsoon in the streets of Manila - PHILIPPINES

- working in finnish Lapland as a snowmobile instructor &amp; husky musher cause former surfer said whenever we got time, he would sign us up for it - GERMANY / FINLAND

- finding an underground flipper bar in a random street - DENMARK

- meeting awesome people on Couchsurfing - AROUND THE WORLD

Loving is living :)
Sharing is caring ^_^