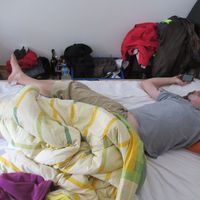 I'd describe myself as a pretty laid back guy. I like taking it slow and do not care about much stuff - which doesn't mean I don't know what the hell I'm doing in life. I am dedicated to things I really wanna reach, I have a rough plan of what's right and wrong and what I gonna do - but no hurry. I love traveling and meeting new people, I wanna know and experience everything about every culture, I wanna drink beer with every nice kid in the world even though that might sound pretty naive.
Maybe I'm pretty much naive but usually I try to trust everyone till I get disappointed by that person - for sure I have prejudices and pictures of stereotypes in my mind like everyone else - and I love to play with it and make fun about it. Please be aware that my humor is politically incorrect - very incorrect to say the least. So please don't be offended.

Recently I was called "cheeky" and I think that this descriptive adjective suits me fairly well. I am quite a friendly person and can be very polite - but especially when u get the chance to get to know me a little bit better u'll find out that I am very direct and well sometimes ... cheeky.

If u think too much about it you'll never do it. But u should definitely have a rough idea of what's going on - or at least friends who have. I try to live life the relaxed way, keeping it slow and simple, even though it doesn't work out the way I want it to be from time to time. In general I try to follow the rules:
Live off the beaten path.
Think outside the box.
Learn from everything u fuck up.
Go with whatever. You can change it later.

Every once in a while I have very idealistic periods in my life when I want to change stuff and doing all the make-the-world-a-better-place shit. I might be annoying during these days - I can promise it's only temporary and sometimes I don't give a shit about stuff.

Before I went to the US where I lived for almost 2 years, I did not know that much about this amazing community. I surfed all over North America, also on Hawai'i, Puerto Rico, Northern Africa, South-east Asia, and almost everywhere in Europe. I hosted in Germany, in Iowa/USA and quite a bit in Seville/Spain. In Canada I used to live in the VIP Zone - a Couchsurfing house with couchsurfers over basically every night.

Especially during my year in Seville/Spain, I hosted bunches of surfers in my apartment - and during summer in 2011 I gave the community the chance to return the favor when I was going on a bike trip along the Danube starting in Germany at the French border until it merges into the Black Sea. Needless to say that I had great experiences on my way east - I was truly overwhelmed by the hospitality of the people I met.

During my travels through the US I made lots of CS-experiences and met awesome and interesting people. In Germany I offered my place to every traveler who needed a couch - I like having people over and though I am sometimes busy and not able to hang out as much as I want to I always have a good time with everyone who is staying with me. I was really excited that even in the Midwest of the US people requested my couch and that I got to meet traveling folks. Hoping to have more great experiences with Couchsurfing on future trips.

Yeah...I was thinking about that a few years now: So to be honest I really like the reference thing here on CS: And I totally expect my surfers to write references. OK!? It's like...usually people in my daily life only tell my cosas muy feas like how dirty my feet are, they want me to do the dishes, not to make that much noise, shut up in class, wrap up my work packages before the deadline, not to throw oranges at them etc. On the other hand my references are always like: he's nice, his feet are so clean etc...

Traveling, hiking, biking, sports in general, conversations with people who experienced life different than I did.

And: RECYCLING
I know it sounds ridiculous and might appear weird but it's fun to look for the recycling numbers on plastic containers and to know that the paper, metal and glas u are using can be re-used.

Sometimes it seems like modern America is one colossal plastic palace. The versatile material is in our cars, toys, packaging, clothing, home goods, food utensils, medical devices and so much more. It is also littering our streets, clogging our waterways and choking marine life. Many plastics can be readily recycled, but how do consumers make sense of all the different types and rules?

PET plastic is the most common for single-use bottled beverages, because it is inexpensive, lightweight and easy to recycle. It poses low risk of leaching breakdown products. Recycling rates remain relatively low (around 20%), though the material is in high demand by remanufacturers.

Interested? There are 6 more!!
But seriously I don't really care if u think recycling is retarded, after growing up in Germany and being used to recycling, I rediscovered it again while living in the US. What u are doing with your stuff is not my business - it's a free country. But honestly I think u suck if u don't recycle.

Surviving a good quarter century of being a sometimes stupid kid that tends to get itself in dangerous situations.

I've seen one of the last Space Shuttle launches that wasn't too bad.

I am sure I will do super amazing things one day and I am still in the phase to get ready for it.

I learn from every Couchsurfer I meet.

I decided to collect random things that I've done and list them as suggestions for your future trips:

United States: Hiking the snowy Bright Angel Trail after a cold night spent at the Grand Canyon's rim
Switzerland: Vierwaldstätter See
Maui: Haleakala Kaupo Gap and camping on an a red beach
Germany: Biking, canoeing, and camping at the Mecklenburger Seenplatte
Spain: Attempting to hike the Mulhacén when covered in snow
Israel: Yoga class at Jerusalem's ancient train station followed by a run in the Rail Road Park
Egypt: Biking to the Valley of the Kings on Luxor's West Bank with friends
Canada: Summiting Mount Temple on a sunny August day
Iowa: Recycling and separating all kinds of plastics