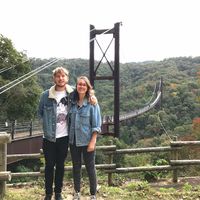 We have a baby since October 2019! As a result, we are no longer able to host via Couchsurfing. Hopefully it will be posible again in the future!

I am 34 years, a freelance marketeer/concert/stand-up comedy booker and I studied Dutch Language and Culture at the University of Amsterdam. I moved from Utrecht to Rotterdam in June 2016 and I live here together with my girlfriend, three cats, one chickens, turtle and a bunch of fish. When we host you in Rotterdam there is a big change I will organize an event, so you are always welcome to join.

When I go travelling I like to meet new people and share our stories with them. Meeting new people is often the best part about travelling. I often travel together with my girlfriend Nikki. We are both vegetarians, but we won't judge you when you are not. Check out her profile: https://www.couchsurfing.com/people/grinwithoutacat

I've been surfing and hosting since 2010! I've met people through Couchsurfing when I was in India, Israel, United States, Korea, Japan, Russia and most of the European countries. I often organize CouchSurfing Meetings too at venues or at my home during our living room concerts. We've often got bands and travelers sleeping in our spare room too. I love to exchange stories about travelling and give some advice about my city and country.

I like horror movies, board games, American Late Night Talk Show, Mexican food and all the other really spice food. I like visiting concerts, stand-up comedy nights and movie theaters, but also things like coffee plantations and Disney parks. I love travelling and exploring new cities and countries and I hope I will keep traveling until I'm really old. And I love Belgian speciality beers and like to try all the beers from local craft breweries too. Fortunately Rotterdam is a great places to try different cuisines and local beers.

I really like all these American television talk shows like Stephen Colbert, Jimmy Fallon, Jimmy Kimmel, Conan, Seth Meyers and James Corden. I also like tattoo shows like Ink Masters, Tattoo Nightmares and Tattoo Fixers. And of course I watch Game of Thrones too.

Renting a scooter in Goa in India, without ever having touched one before. The most stupid and amazing thing.

I can teach people new music, how to be great at playing Mario Kart on N64 and how to make a prefect boiled egg. And I often make Dutch pancakes and/or sushi when I go surfing in foreign countries too, I like thanking my hosts by showing my unbelievable cooking skills.